About The Society of Vintners 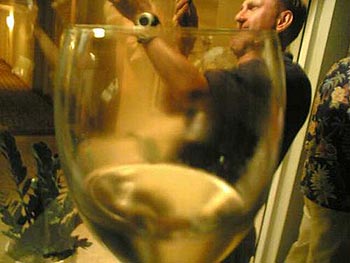 The Society of Vintners owes its origins to the Nottingham Wine Buying Group and the Allied Wine Buyers Consortium.

In the early 1970's, five Nottingham Wine Merchants met in a Nottingham hotel and joined together to form the Nottingham Wine Buying Group to enable them to compete more effectively in the marketplace. John Walton was appointed Chairman, the position which he held for over twenty five years.

Initially, the Distillers Company strongly supported the Group and they introduced many companies, some of which were admitted as members, giving a spread throughout the U.K..

In the late 1960's two Wine Merchants in North London, Arthur Rackham and Lew Curtis, similarly formed the Allied Wine Buyers Consortium which grew to a membership of twenty members in the South of England and Midlands. As time went by, membership fell slightly and they decided to approach the Nottingham Wine Buying Group, whom they joined collectively as a Group. The AWBC had its strength in the shipping and the NWBG in deals with major national suppliers. At this point it was decided to change the name to the National Wine Buying Group, with the initials NWBG, fortunately being the same. The parent company Nottingham Wine Buying Group Limited also remained. 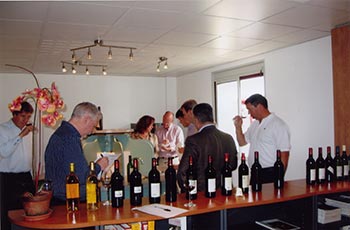 Group tasting at the headquarters of Yvon Mau in Bordeaux.

Mr Lawrence Page, current chairman of the Society of Vintners explained: "The group has grown since then to incorporate 25 members covering England, Wales, Scotland and the Channel Islands. The AWBC had its strength in shipping and the Nottingham group in deals with major national suppliers. Since then we have been able to expand direct shipping from abroad."

The Society of Vintners has a Chief Executive working from an office in Sussex and committees within the group are dedicated to various wine producing areas such as Chablis, Rhone, Champagne and so on.

"The committees meet for tasting and reviews of purchasing four times a year. We have a range of different samples from different negociants and recommendations are taken from there. It may be that one member has a particular agreement which he does not want interrupted, but mostly we get together and put our weight behind the Group recommendations, " said Mr Page.

The Society of Vintners prides itself on a quality rather than price focus, differentiating it from many other buying groups. "We look for quality and the service provided by suppliers, not the most expensive deals, but nor are they the cheapest." 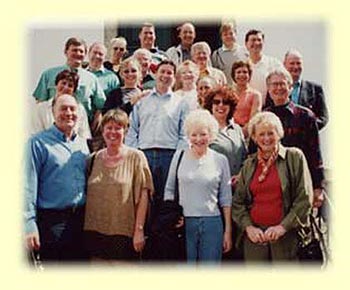 Group members on the steps of Quinta das Carvalhas, a royal Oporto estate and park of the Real Campanhia Vena.

Visits are are carried out by the members of the society as often as possible and a recent trip was undertaken to Portugal for a visit to the group's main port wine supplier.

Aside from increased leverage, potential Group members benefit from an existing skill base, with overheads kept to a minimum. The requirement to join is the ability to contribute reasonably to the product mix, which is reviewed regularly. As Mr. Page said: "huge benefit is the opportunity to talk to like-minded people several times a year at our meetings".

We can help with practical problems, such as where to buy carrier bags or carton, computer systems and ancillary services."

Cross border trading has had a detrimental effect on the independent wine merchants, with sales, particularly in beers and spirits, falling considerably. Although this may have been felt most in the south-east, reverberations have been felt around the UK. As Mr. Page said: " We have this ridiculous anomaly of cross channel trading where consumers can buy wines and spirits without paying Duty and VAT in this country. Having said that, other recent trends mean that we have all benefitted from the increase in consumption, particularly of table wine."

According to Mintel, it tends to be the heaviest wine purchasers who buy abroad. As one of the contentious issues in the trade, according to HM Customs, cross border shopping accounts for 8% of the wine market, although trade estimates tend to be higher. It is legal trade, rather than smuggling, which tends to have more impact on the wine trade. 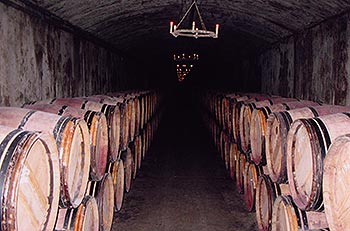 Cellars at Yvon Mau in Bordeaux.

Since the introduction of the single European market, the amount of wine purchased abroad and bought in the UK has increased each year.

The size of the independent in comparison with large nationals affords them the luxury of speed in terms of new products onto shelf and the added benefit of a consortium where the exchange of ideas and findings is imperative.

"We have found that the French wine market is relatively static, or even falling and have moved towards growth areas such as Australia and New Zealand, which have shown a staggering 50% year on year growth; also new areas such as Chile and Argentina.

We are very fortunate in the UK as the public are willing to try new wines much more than perhaps consumers in other countries where they show allegiance to their own wine producers. The Society of Vintners is able to offer products from all over the world, where there is a demand."

The Society of Vintners will continue to look towards forging closer links and developing more exclusive overseas brands, and placing more emphasis on overseas visits.

Mr. Page concluded: "We want to catch the imagination of members in expanding our New World wine opportunities and also to maintain focus on our Group meetings which are wonderful opportunities, not only for members, but also for wives and families to come together in a relaxed atmosphere and exchange ideas." 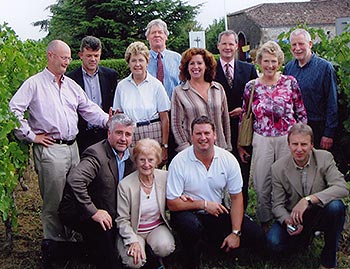 Yvon Mau vineyards, Bordeaux - Lawrence Page - the Chairman of the Society of Vintners back centre.

Mr. Page concluded Mintel's report states that factors likely to influence the future development of the wine market include the UK's changing demographics, the state of the economy, the single European currency and shortage of product. Demographic changes are likely to bring into the market an increased number of consumers who are familiar with wine and willing to experiment.

The volume growth of wine is expected to be maintained, with a further growth in value terms as consumers trade up to superior wines. The booming worldwide market and the trend to red wine away from white has resulted in a shortage of red wine, which may force prices up. Space allocation is not likely to change, the balance already favours wine.

Reports suggest that for wine retailers to succeed, they need to be specialists as consumers are becoming much more educated about the product.

Retailers are expected to experiment with their offerings, not only with different wines, but also wines presented in different formats and pack sizes.

It is in this respect that the Society of Vintners has found the recipe for success. A combination of buying power and specialist knowledge will see the group ready to move with the changing shape of the market.